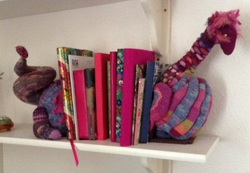 This is a dressed up pair of cheap perspex bookends, which I made up as I went along. I started by collecting some similar colours together, then I started with the parts I could visualise, & linked things together afterwards.

The head is a classic sock shape, started from the toe. Once I'd made the neck as long as I needed, I increased fast to make the body. The fluted chest is done the same way as a fluted tea cosy, knitting in vertical stripes of 2 colours, pulling the "spare" colour across the back of the work. Then I knitted a plain section to cover the perspex.

While I was stuffing this section, I wired the head & neck to make sure it stood up for itself.

After the body was stuffed, I added the front section of the wings, along with bead eyes & knitted triangles for ears.

The tail is based on the horn pattern from "Sam the Ram", but considerably larger. Then I increased to make the body.  The legs are again modified sock shapes.
Back to Household items.
Google
Accept Cookies?
Provided by OpenGlobal E-commerce